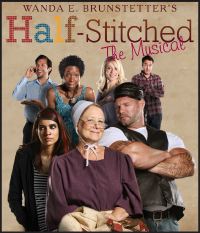 Situated on the beautiful Dutch Valley Campus, conveniently located just west of Interstate-77 in Sugarcreek, Ohio, The Carlisle Inn is a beautiful four-story hotel with upscale amenities and attentive service. The property shares a campus with the acclaimed Dutch Valley Restaurant and Bakery, known for their Amish Kitchen Cooking. Also onsite are two beautiful gift stores, seasonal carriage and rickshaw rides, and a market, featuring local cheeses, Ohio-grown meats and much, much more.

Until 2012, one of the most-frequent questions the hotel staff would encounter was “In the evening, it seems like the streets roll up and there is nothing to do. Do you have any suggestions?” With that in mind, the Carlisle Inn partnered with Nashville, Tennessee’s Blue Gate Musicals to bring live, professional entertainment to Ohio’s Amish Country.

From Ohio, the Carlisle Inn focused on transforming their 3,600 square-foot conference center into a “theater-in-the-round,” complete with elevated seating, theatrical light and sound systems, and an intimacy that can only be found in a 200-seat venue: the goal being to insure that every guest is near the action while professional talent performs to all sides of the venue. Meanwhile, Nashville’s Dan Posthuma, best known for his work with acts such as The Gaither Homecoming, Ray Stevens, and many others, conducted thousands of auditions across the United States to find professional talent capable of fulfilling the demanding roles which include drama, comedy, powerful ballads and energetic Broadway-style melodies. The two then joined forces to open the doors in June of 2012.

After a very successful first season in which over 18,000 people viewed the production, it was apparent that the Carlisle Inn had filled a much-needed gap in the itineraries of Amish Country visitors. Now in their second season, due to popular demand the theater continued its run of  “The Confession.” The musical is based upon a trilogy of novels by New York Times best-seller Beverly Lewis, while two of the three novels have also recently made debuts as movies on the Hallmark Channel.

Although “The Confession” is coming to an end on August 17, 2013 theater-goers can be excited for the August 22 opening of the hotel’s new musical “Half-Stitched” by Wanda E. Brunstetter. Also a New York Times Best Selling Author, Wanda E. Brunstetter’s novel “Half-Stitched” is sure to be a musical and comedic hit as it has been adapted for stage by former Bob Hope Comedy Writer, Martha Bolton.

Half-Stitched is the story of six unlikely participants who join a Quilting Club assembled by Emma Yoder, an Amish Widow. This mismatched lot includes a troubled young woman, a struggling couple, a widower, a rough and tough biker, and a preacher’s wife. As different as they seem, when these beginning quilters learn to transform scraps of material into beauty, their fragmented lives begin to take new shape with the helping hands of each other and the healing hand of God.

Given their wholesome content, these musicals are intended to inspire and encourage. They are safe for the entire family, church groups and anyone who wants to see a professional performance in beautiful Amish Country. Many shows are already sold out, so be sure to reserve your tickets for “Half-Stitched” today! The performances will run through December 21, 2013. Further details are available at www.amishcountrymusicals.com or by calling the hotel at 855-411-2275.