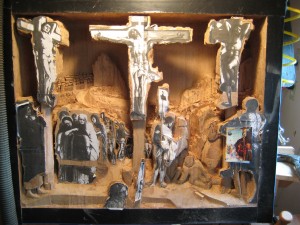 When you put tools, wood and a craftsman together, the results can be amazing. Take the deep-relief woodcarvings currently on display at Lehman’s in Kidron, Ohio by Holmes County resident Paul Weaver.

A furniture maker by trade, Weaver’s always worked with wood. By day, he’s building bedroom suites for many of the furniture stores that dot Amish country. But at night, in the top floor of his shop, he’s what most folks would call an artist.

About 23 years ago, he took up whittling, and then a workshop with master carver David Bennett changed him forever. “I was a week with him. He taught me how to water, to do clouds or textures.” Weaver, who is Amish, came home and started doing his own deep relief carvings.

“I started with mahogany, you know, but then I went to butternut, some folks call it white walnut. It’s easier to work with, using hand tools. You get better detail. Basswood, hardwoods, those are brittle on the details, and they’ll break.”

He doesn’t consider himself an artist at all. “Oh, no. I can’t draw a bit. I am so appreciative of the artists that I see. They have a true gift. My nephew, now, he can draw. He drew me a picture once for a carving, and it was beautiful, and I used that.”

Inspiration for Weaver’s carving comes from the rural-themed paintings of John Sloane, Thomas Kincaid, and Michael Humphries. “Sloane, he does beautiful work. And I think he’s fascinated by the Amish!” Weaver chuckles and goes on. “He shows milking cows, cutting wheat…There’s action in his pictures. They’re my favorite to carve from. His proportions are perfect, there’s never an error in his work.” 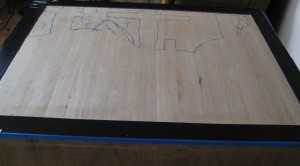 Weaver is modest about his skill. “Well, I feel it’s a God-given talent to me, because I’m not very smart. Its relaxing for me.” He goes on: “It puts me in a different place, is how I can describe it.” When he’s in that shop, with his hands on his tools, he’s in a world of his own.

At some point in the future, he’d like to stop furniture making and carve full time. Each relief is carved from a laminated stack of butternut that Weaver glues up personally. He uses ordinary carpenter’s glue and wood clamps to build up the butternut blocks to the appropriate thickness. “I’ve done carvings on an inch and a half (block), but I’ve never gone any thicker than seven inches,” he says.

In his very early pieces, Weaver actually applied some elements to the carving. “Things like window slats, those were difficult.” He no longer does that. “It’s all carved out, every bit. That Crucifixion, that is all one piece. It took me six months.”

After he’s sketched in the main figures, he uses an electric drill press to rough out the carving, but after that, it’s all hand tools. “I use drawknives and chisels for seventy-five percent of it. I just take my time and carve. I’ll use a tool like a Dremel to add texture at the very end.”

Family plays an important role in Weaver’s work. He cites his wife Linda as his best critic, saying she can “just tell when something isn’t right.” Weaver’s youngest son has what his father fondly calls “an artistic eye,” and between the two of them, he says, they’ve helped him work out issues in his carvings.

Lehman’s president Galen Lehman first saw Weaver’s work at a local fundraiser for handicapped children. The president of Lehman’s, in Kidron, Ohio, Lehman couldn’t get the gorgeous woodworks out of his mind. 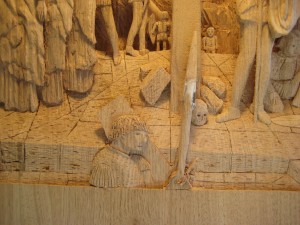 “The idea that Paul can create these amazing 3-D carvings from a single block of wood just took my breath away,” Lehman said. “Looking into his dioramas made me feel like I was being transported into another time and place. I knew we had to find a way to share his art with the rest of the world.” Eventually, he was able to persuade Weaver to show his pieces at Lehman’s in Kidron.

“I’m so pleased to have the opportunity to work with Galen. And the people at the store are so kind, so helpful. It’s a pleasure to show my carvings there. I’m hoping to be able to be there, with a started carving in a month or so, to show the people, so they can see how it works,” said Weaver.

He says it’s hard to carve in public: “I’ve had places that I’ve gone before, and when you’re talking to the people, you just can’t concentrate to use a chisel, you know.”

Weaver is hoping that he can interest more young people in learning the technique during his showing at Lehman’s. “I’m looking forward to meeting people there, meeting other carvers. Deep relief isn’t something everyone does…I hope to compare ideas. There aren’t any big secrets. It’s always a learning process.”

Paul Weaver’s carvings are displayed in the Buggy Barn at Lehman’s in Kidron, Ohio. Lehman’s is open Monday to Saturday, 8:00 a.m. to 6:00 p.m. The store and exhibit are closed on Sundays. For more information about Lehman’s, visit www.lehmans.com, and choose “Visit Our Store.”