The annual selection meeting was held at the Super Bowl XLVIII Media Center in New York City. The newest members of the Hall of Fame were selected from a list of 17 finalists who had been determined earlier by the Pro Football Hall of Fame’s Selection Committee.

Brooks never missed a game during his 14-season career with the Tampa Bay Buccaneers. A six-time All-Pro selection and member of the NFL’s All-Decade Team of the 2000s, he was named the NFL Defensive Player of the Year in 2002.

Guy becomes the first full-time punter to earn election to the Pro Football Hall of Fame. An impact player throughout his entire 14-season career with the Oakland/Los Angeles Raiders, he was named All-Pro six straight years.

Humphrey was named first-team All-Pro five times and earned six Pro Bowl nods during his career with the Atlanta Falcons (1968-1978) and Philadelphia Eagles (1979-1981). Although not an official statistic at the time, he is credited with 122 career sacks.

Jones stepped into a starting role as a rookie and excelled as one of the game’s finest tackles during his 12 seasons with the Seattle Seahawks. A member of the NFL’s All-Decade Team of the 2000s, he was named All-Pro six times and voted to nine Pro Bowls.

Reed caught 951 passes for 13,198 yards and 87 touchdowns in his 16-season career. He hauled in 50 or more passes in 13 seasons which ranked second at the time of his retirement.

Strahan recorded double-digit sack totals six times in a nine-season span including a NFL single-season record 22.5 sacks in 2001. A five-time All-Pro pick, he amassed 141.5 sacks in his 15-season career with the New York Giants.

Williams, a four-time All-Pro and eight-time Pro Bowl selection, intercepted 55 passes for 807 yards and 9 touchdowns during a 14-season career with the Phoenix/Arizona Cardinals and St. Louis Rams. 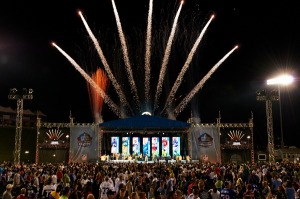 The 2014 Pro Football Hall of Fame Enshrinement Ceremony and the NFL/ Hall of Fame Game will be held on August 2-3, 2014 in Canton, Ohio.